I teased it earlier in the week, and I’m so excited to share this with you!  UNFINISHED features Quinn’s POV and is set 10 years before UNSTRUNG.** It should be released in early January (sooner if I finish editing early).

In a world where genetically-engineered humans serve as slave labor to “real” humans, ten-year-old Quinn is an anomaly. Designed with superior intelligence and physical attributes, he lives and trains at Maren DeGaul’s lakeside mansion, being readied for some mysterious purpose as dictated by Precipice Corporation. Despite the comfortable surroundings, Quinn is frequently pushed to his limits by his human guardians, often learning lessons in pain and loneliness.

That all changes the day they introduce him to a new artificial, one who is both his equal and his soulmate. But when Maren decides the new artificial is flawed and should be decommissioned, it’s  up to Quinn to find a way to save his only friend. 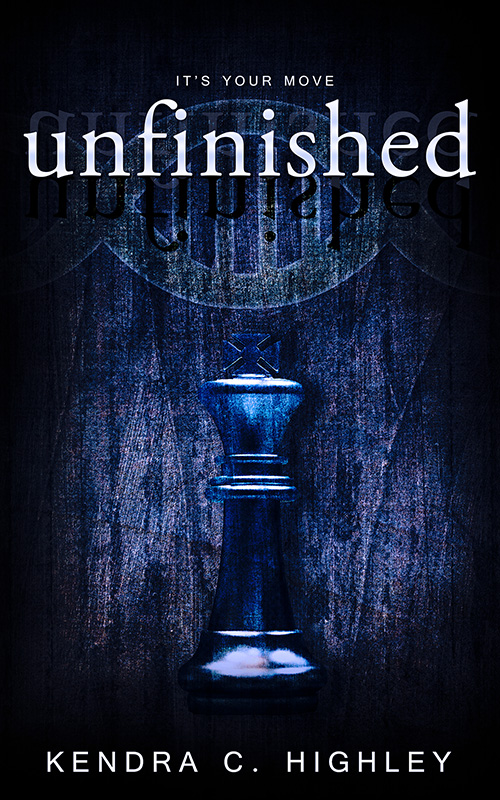 Chess is an important element in the story, so when Glendon at Streetlight Graphics sent me this “draft cover” I wrote back and said, “DONE!” : )  The dark colors and the almost harsh background lend themselves to the story well, too.

**NOTE:  If you haven’t read UNSTRUNG, there are significant spoilers in UNFINISHED. You can read them out of order, but please be advised.**

Quinn watched the monitor. It’s camera was trained on the prep room where the new K700 prototype was under development. She was only the second model in this line, and the first female.

His heart fluttered in excitement. Miss Maren had told him the little girl was going to be his friend. Created specifically to keep him company and learn with him. After spending most of his time in the company of adults—both human and artificial—he could hardly wait to meet her.

Lexa. That would be her name.

She was still pale, just like the day before and the day before that. He wondered when she would change colors, and what color she would be, but Dr. Mendal had said not to pry, so he didn’t ask. He’d learned that if he asked the wrong questions—or too many in a row—that his curiosity would cause trouble. And pain.

The girl stared blankly into space, but he could tell she was afraid by the way her knuckles whitened as she clutched her blanket. Or the way her right eyelid twitched every so often. Being scared was a good sign—it meant she was turning into a person.

He immediately flushed, feeling bad. He didn’t want her to be scared, and it wasn’t nice to be glad about it.

“She’s…wondering where she is, and why she’s here,” he said after a moment. Even though he was watching her over the feed, he could read her mannerisms easily, which was strange. But if Lexa had been made to be his best friend, maybe that was why he could tell how she felt.

He watched her a moment longer, registering how her chest rose and fell more quickly as the fear turned into panic and grief. “She thinks something’s wrong with her.” Quinn turned to Dr. Martine. “Please, we need to let her out.”

“We can’t, you know that. No cross-contamination until imprinting is complete.” Dr. Martine tapped his stylus against his data pad. “But maybe we could let you in? What do you think? You want to try?”

Quinn’s heart leapt. He tried hard to keep the eagerness out of his voice when he said, “Oh, yes. I think she might talk to me.”

The door at the back of the observation lab swooshed open and a pair of high heels clicked toward them. Quinn rounded his shoulders to sink a little shorter. I’m not a threat, I’m not a threat. I’m invisible.

Cool fingers tipped with long, pointed fingernails, brushed the back of his neck. A welt rose up on the sensitive skin below his hairline where they scratched. He held very still.

Invisible. Not a threat.

“Hello, dear,” Miss Maren said, releasing Quinn to give Dr. Martine a kiss on the cheek. “Any progress?”

“Um…” He shot a look at the girl behind the glass. “Well, we were thinking about exposing her to some stimuli to see if she’s ready for advanced configuration. Namely, I thought I’d send Quinn in. She’d be less likely to see him as a threat, given her programming.”

Quinn balled his fists around the hem of his T-shirt. Please. Please don’t say no.

Miss Maren pinned him with her eyes. Calculating. That was the vocabulary word he’d use. It meant shrewd. Which sounded a lot like shrew. Which meant mean, screechy lady.

He bit the inside of his cheek to keep from smiling. It wasn’t a real smile anyway, he reasoned. It would be a nervous “I’m not hiding anything” smile, when all he could afford was a vaguely bored look if he hoped to get what he wanted.

Because that’s what Miss Maren was good at. She found out what he wanted, then took it away.

Five minutes? That was all? The look on her face, though. She wanted him to argue. If he argued, she could tell him no.

Her eyes widened and she nodded in approval. “Very well.”

Dr. Martine gave him a pat on the back and opened the door to the clean room. “Full measures. No contamination.”

Right, no touching. Dr. Mendal had told him her immune system was still developing. His germs could hurt her. Inside the clean room, which was just a little hall between the observation lab and her prep room, he pulled a white jumpsuit out of the cubby. It covered him from his neck to his toes and had a hood to cover his head attached to the back. The suit crackled every time he moved. It was polymer based and felt like a trash bag.

By now, the little girl was hugging herself and rocking back and forth on her bed. Quinn hurried to don a pair of latex gloves. She would be better if she could just meet him. He knew it. She needed a friend; that would fix everything.

He gave a thumbs up to Dr. Martine and the airlocks opened with a clank. When her door opened, she startled, staring wide-eyed as Quinn stepped inside.

“Who are you?” she whispered.

Good, so she could talk. They’d loaded her brain with all the right prompts, but they hadn’t been sure. “I’m Quinn.”

She nodded slowly. “Who am I?”

He blinked fast to clear the tears smarting in his eyes. He remembered the white room. He remembered how scared he’d been. Just being in here…it was awful. “You’re Lexa.”

“Lexa,” she said, like she was trying out the word in her mouth. “Lexa. Is that a good name?”