Greetings Earthlings! I come in peace…

At least, that’s how I felt when I faced 180 8th graders today at my son’s middle school. It went really well! But, I had a bit of an experiment while I was there, too. When I asked them how many of them would rather wash the dishes than read…half of them raised their hands. When I asked how many of them only wanted to read at school–two-thirds of them raised their hands.  Less than 1/3 of the 8th graders would read–willingly–outside of school.

We have to change that. And we can. But, it’s going to take some hard, hard work. How? I’m glad you asked. After my first three posts (talking about getting real, emotional arcs, and characterization), I feel like this last bit of advice is kind of a no-brainer, but it’s important: 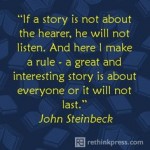 One thing I’ve learned, both in working with teens and having teens myself (and being a teen many moons ago), is that they are fickle. And I don’t mean that in a bad way. What I mean is, they don’t waste time on stuff they don’t like. If you don’t grab them with a compelling subject right off the bat, they’re going to drop the book and wander to the next thing…which might be a round of Halo with their friends or watching TV. We have so much competition for their attention spans, that if you don’t hook your audience and keep them hooked, they’ll easily find something else to do with their time.

The cool thing is, though, that if the story is evocative, teens will read about any subject–be it ghosts or dystopian worlds or a rural high school. It has to be relatable, but exciting/interesting.

How do you do that? If I knew the perfect answer, I’d be on the NYT bestseller list every six months. But, what I think is that if you can hit them where they live, in a way that validates their existence and shows a teen’s resilience and strength, it doesn’t matter what the subject is…as long as you keep it moving.

Genre will have some conventions, too. For romance, there has to be smolder, emotions, touch. For dystopian, you need a corrupt, oppressive society that marginalizes your teens. For urban fantasy, you need cool, spooky surprises (and a dash of romance never hurts). What matters, though, is drawing them in early and never letting up.

I’m not saying I have all the answers, but when I see a great piece of YA fiction, it has all these things going for it. And that’s how you earn–and keep–your teen readers.

How about you? Any thoughts on making a story irresistible to a teen reader?  Any other keys to writing for teens that I missed?