I’m so excited, and proud, to announce the release of The Bad Boy Bargain. It hits stores today, in eBook and paperback, at Amazon, Barnes & Noble, Kobo, iBooks, and other retailers. I really enjoyed writing this book, and I hope you enjoy reading it. Want to hear more? In celebration of the launch, here’s the description and a little excerpt. Enjoy! 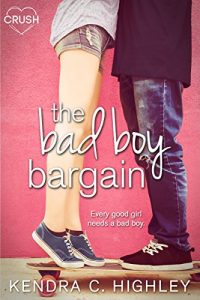 Baseball player Kyle Sawyer has many labels: bad boy, delinquent, ladies’ man, fearless outfielder… Only one of them is actually true. But then sweet ballet dancer Faith Gladwell asks him to help wreck her reputation, and everything goes sideways.

Faith knows a thing or two about love, and what she had with her cheating jerk of an ex wasn’t it. When he starts spreading rumors about her being an Ice Queen, Faith decides it’s time to let a little bad into her life.

Lucky for her, Kyle Sawyer–dark, dangerous, totally swoonworthy Kyle Sawyer–is landscaping her backyard over Spring Break. Shirtless. And if she can convince him to play along, ” dating” Kyle will silence the rumors.

But Faith’s plan threatens to expose Kyle’s biggest secret of all…and that’s a risk he’s not willing to take.

Disclaimer: This book contains drop-the-book-and-fan-yourself kisses…and touches. Fall in love with a bad boy at your own risk.

By the time Faith made it home, took a smoothie from Mom’s outstretched hand, and went upstairs to shower, six Snapchat notifications, all from different people, had popped up on her phone:

A sad-faced Skye: I’m so sorry about last night. I should’ve warned you. I feel awful.

An angry Piper: I’m at the mall and there’s some asinine shit coming out of Cameron’s mouth right now. Should I punch him?

A gossipy Fiona: Is it true that Cameron dumped you?

A sneering Mitchell: You as cold as Cam says?

A dumbfounded Katrina: Holly is telling everyone at the mall that she stole Cam from you because you don’t put out. Want me to dump a Slurpee in her hair?

A smirking Jackson: My car overheated. I heard you could cool it down for me. How about it, ice queen?

Tears of rage filled Faith’s eyes, especially when a new Snapchat chimed: Cameron, sending her a picture of Holly sitting in his lap at the party last night. The message read: Trading up.

She squeezed her phone in her hand. What was she going to do? She had half a mind to tell Kat to pour that Slurpee down Holly’s shirt and Piper to punch Cam in the throat. But that wouldn’t solve anything. Not at all.

No, she needed something bigger. Faith wandered to her window, to stare outside and organize her thoughts. Except, when she caught sight of the ripped, shirtless guy in her backyard, she forgot what she’d been thinking about.

“Who’s that?” she whispered, touching the glass.

His back and shoulders flexed under tanned skin. A black tattoo—was it a bird?—was on one of his shoulder blades. There was a bruise on his side, too, but she couldn’t make herself wonder about it. The guy’s dark hair was in his face as he tugged hard at a holly bush, yanking it from the ground.

Look at those arms. Faith stared, her mouth open. Who was he?

The holly bush gave way and he tipped back, dirt flying. Faint laughter drifted up through her window as he climbed to his feet with his prize, and she caught a look at his face.

She gasped. Holy crap, that was Kyle Sawyer. The stories she’d heard about him were numerous, and if a quarter were true, he was not the kind of guy she’d want to talk to. He shoplifted, vandalized buildings, drank, hung out with college students—girls. College girls. And rumor had it he ran illegal street races with his Charger.

So why did he look like he was having a blast ransacking her backyard? He had an awfully nice smile for such a bad boy.

A thought exploded in her brain—wait a minute…bad boy. Kyle was the one guy at Suttonville High who’d seen enough action to have his own lore. His exploits were darker than sin, and being with him was an instant reputation killer for any girl at Suttonville.

This was it. Kyle would be her revenge.

One thought on “New! The Bad Boy Bargain”