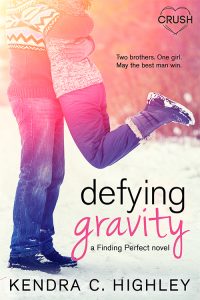 I’m so excited to announce the release of Defying Gravity, my newest release from Entangled Crush! For those of you who enjoyed Finding Perfect, it’s time for Zoey to find her happily ever after, too. Check out the blurb:

Two brothers. One girl. May the best man win.

Disclaimer: This book contains enough sexual tension to melt snow, the hottest near-kiss in the history of near-kisses, and a sexy snowboarder determined to win the heart of the girl he loves.

Zoey Miller lives for her holidays in Aspen. Her time up on the mountain with the Madison brothers, Parker and Luke, is everything. But for the first time, it’s not enough. This time, she’s determined to win one of the brothers’ hearts.

But the brother she has in mind is a renowned player, with hordes of snow-bunnies following him around Snowmass resort. And the other…well, he’s her best friend and knows she deserves better. Namely him. And he’s going to win her heart.

If you need a little winter break this summer, I’ve got you covered: snow, mountains, hot snowboarders, sleigh rides–you name it! You can find Defying Gravity in eBook format on all major retailers, as well paperback from Amazon. But, before we close, how about a little teaser?

Parker climbed into the sleigh and held out his arms. Wondering what the hell she was doing, Zoey slipped onto his lap and settled herself. His arms came around her at once, and the driver whistled at the horses. The sleigh started with a lurch, pressing her against Parker’s chest.

Breathe. In and out. Just breathe.

His hand roamed up her back. “You comfortable?”

Which was true. In fact, he was keeping her a little too warm.

So, don’t let this go too far, idiot. Remember, you have the hots for Luke, so don’t confuse things.

No, buts. It will ruin everything. Slow it down.

Tell that to her pulse, which raced ahead of her good sense.

The horses plodded through the snow, pulling the sleigh like it weighed nothing. The breeze had quieted, adding to the hush that only the horses’ bridle bells broke.

Parker’s hand slid up her back. She could feel its warmth through her coat, which made her shiver again.

“You cold?” he whispered.

She shook her head. His face was so close…his lips were so close. If the sleigh hit a bump, they’d collide in a firm kiss. Which wasn’t the worst thought she’d ever had…

God, what she was doing? He was her friend, and there were rules, boundaries. She knew all this, and understood the perils of having a guy best friend. You had to stay neutral, one of the boys, or things went topsy-turvy fast.

So what had she done? Volunteered to ride sitting in his lap. Self-control, thou art worthless.

She leaned against him while her thoughts tumbled about in her head. She was warm, cozy, and held tight by a boy she’d trust with her life. At home, she never felt like this. She always had to be on her guard, always the one people watched and looked to for cues. Here she could let all that go and enjoy a silly sleigh ride, even though most of her so-called friends at Alderwood would declare it a lame way to spend an evening.

And yet, she wasn’t sure she should be letting it happen. She wasn’t even sure why it was happening.

Parker’s whisper tickled her ear, sending an ache through her belly. She turned slightly to find his lips an inch from hers again. She didn’t want to hurt him, or lead him on. But, right now, he was looking at her in a way she couldn’t decipher. Something that made her want to cling to him and explore his mouth with hers.

What was wrong with her?

“I was thinking,” he whispered, “that maybe I should kiss you.”